I have to admit, when Disney first announced the new Beauty and the Beast movie, I wasn’t that excited. Could Emma Watson, best known for her role as Hermione Granger, make a good Belle? Is it a good fit? How is the film going to look?

But after I saw how beautiful the live-action Cinderella turned out, my doubts sort of went to the side. Then I saw the first image from the movie and I fell in love!

This all came about because I was challenged by a friend to make a stained glass window cake, using the stained glass window from the first movie. I really thought about doing this for a while. I printed it out, figured out how big it would have to be for both quarter and half sheet cakes. But then I saw how small all the details would have to be on a quarter sheet and quite frankly, making a half sheet would be too much for a personal project.

Then I got the idea to do something more in my style. I was in love with the lovely folds of Belle’s dress in the image used for the cover of Entertainment Weekly. I thought about how these characters would look on a cake. I then took an inventory of the colors I already had to see if I could do this in some sort of economical way. When I can be resourceful and use what I already have on hand, I absolutely try to be!

Then I thought, “wouldn’t it  be fun to give this cake away on my Facebook page to feel like I am a part of this huge movie event?”  I know a lot of people are excited about this movie, so I hope that whomever wins is both a super fan of custom cakes AND Walt Disney pictures!

Below I am going to take you through my process of making these characters step-by-step. The very first thing I do is come up with my color palette. These are the colors I came up with, below. I only had to make a bit more of the golden yellow.

The next step was to make a silhouette. I use this as a backing for my realistic fondant work. It allows me to give it extra support and to keep everything in proportion. I used a Sharpie to make an outline of the basic image. Then I rolled out some white fondant very thin.

Next, I added tylose powder to a good amount of fondant. Tylose powder makes fondant dry quickly and more firmly. 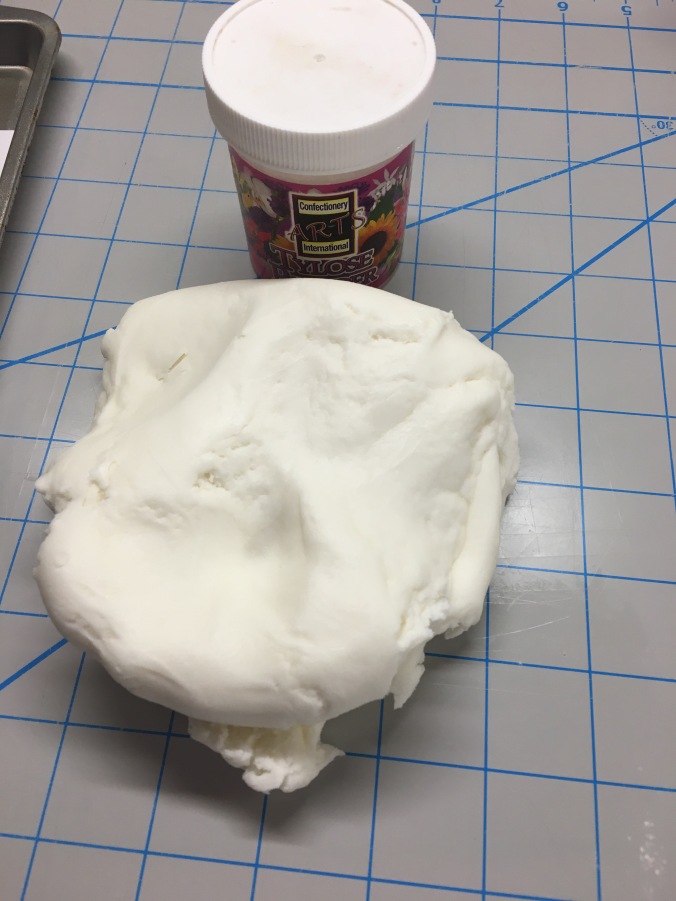 Then I put my image on top of the fondant and gently pricked it with a pin. This allows me to only cut the image ONCE. I used to cut out the image as a template, then put it on my fondant and cut it again. This way is so much better. 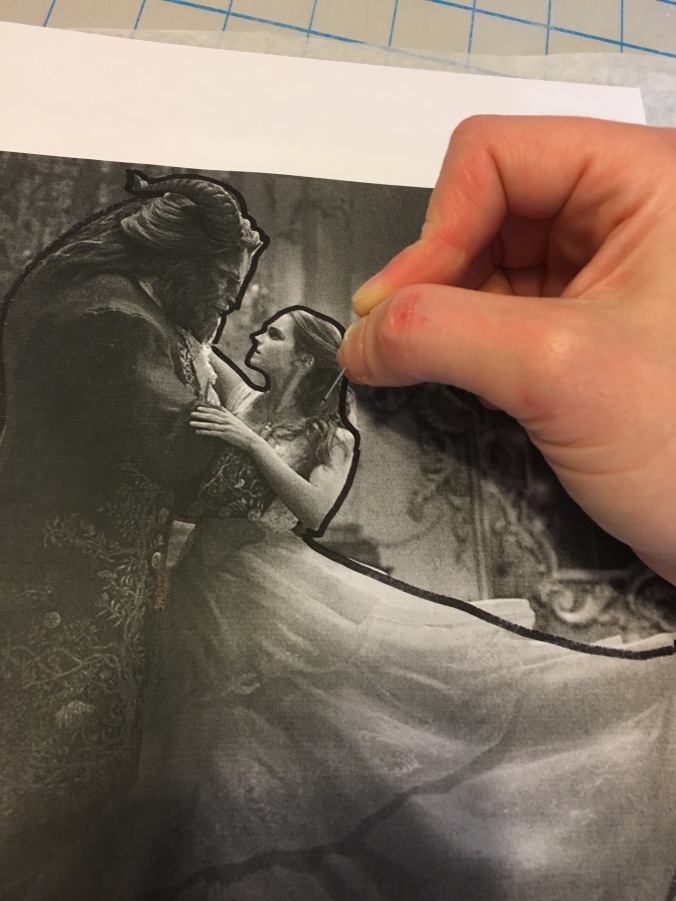 It is almost impossible to see the little pin pricks in the photo I took, so I left that photo out! I got my X-Acto knife and put in a fresh blade and began to cut. I also cut out the negative space. In fact, I cut the negative space out first so it doesn’t get distorted. Then I dusted a piece of wax paper with corn starch to avoid sticking and transferred the image to the wax paper to dry.

From here, it was just a matter of slowly layering and building up the image from the bottom up. The first thing I did was Belle’s torso without her head. I wanted to make the head separate so that it would appear that she was looking up. I wanted to layer the bottom of her head on her neck to make it more realistic.

I rolled my fondant sort of thick for Belle’s head so I could add details and really contour her nose and blend her neck and throat together.

I made sure to make her sleeves before her hair since her hair rests over her dress. I didn’t take a ton of pics of making the Beast’s head, but I did it in the same way. I added extra fondant for his cheek and blended it in. Then I made some thin strips for some more of his fly-away hairs. I skipped his horn for now. I wanted to start in on that beautiful dress! 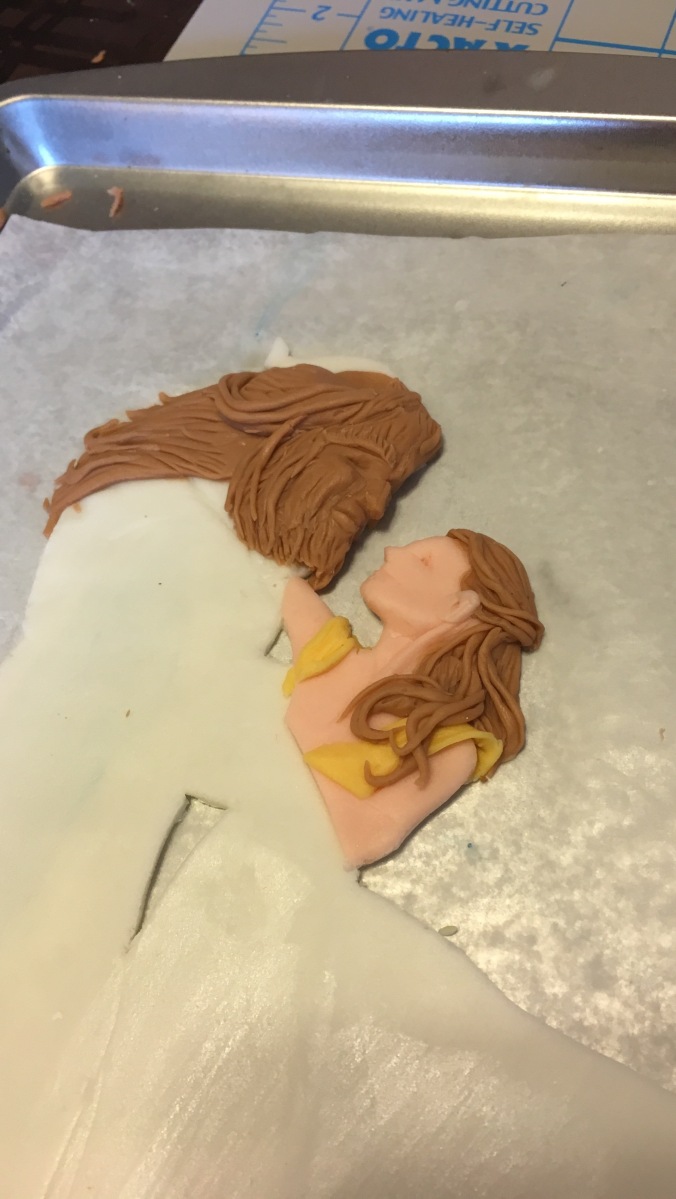 The Dress .. I noticed in the image that she has a lot of light, tulle-like layers underneath. The best way to tackle this was from the bottom up.

The first step was to make some very thin strips of my yellow fondant. I made sure my surface was well-dusted so it would not stick.

Next, using my ball tool and my sponge, I made the edge even thinner! 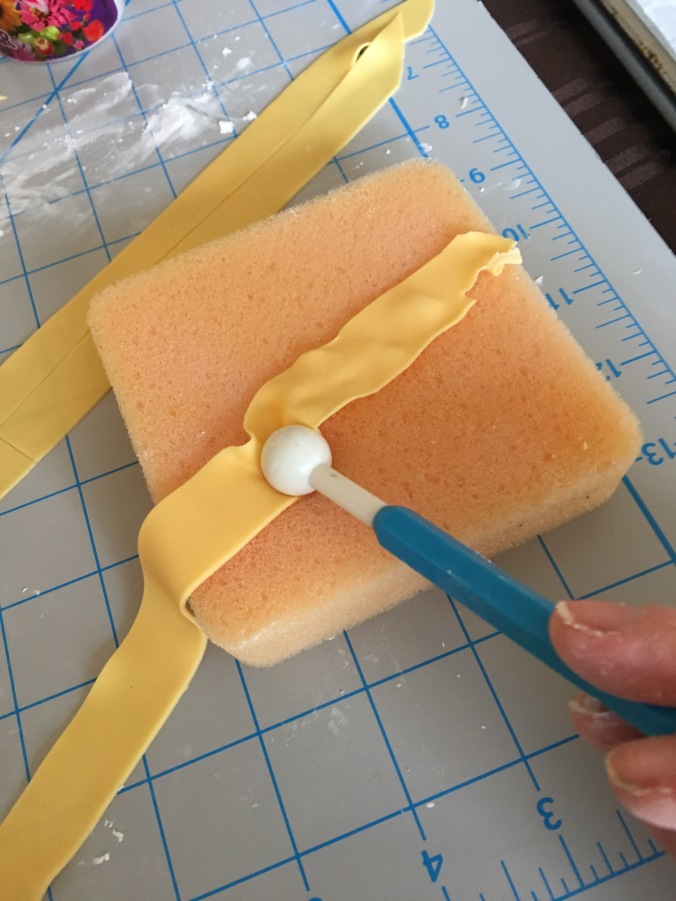 The next thing to do was to lightly wet the white fondant with a little water using a paint brush. Then I ruffled up my thinned-out fondant and applied it. I kept going and going until I had three layers of ruffles. 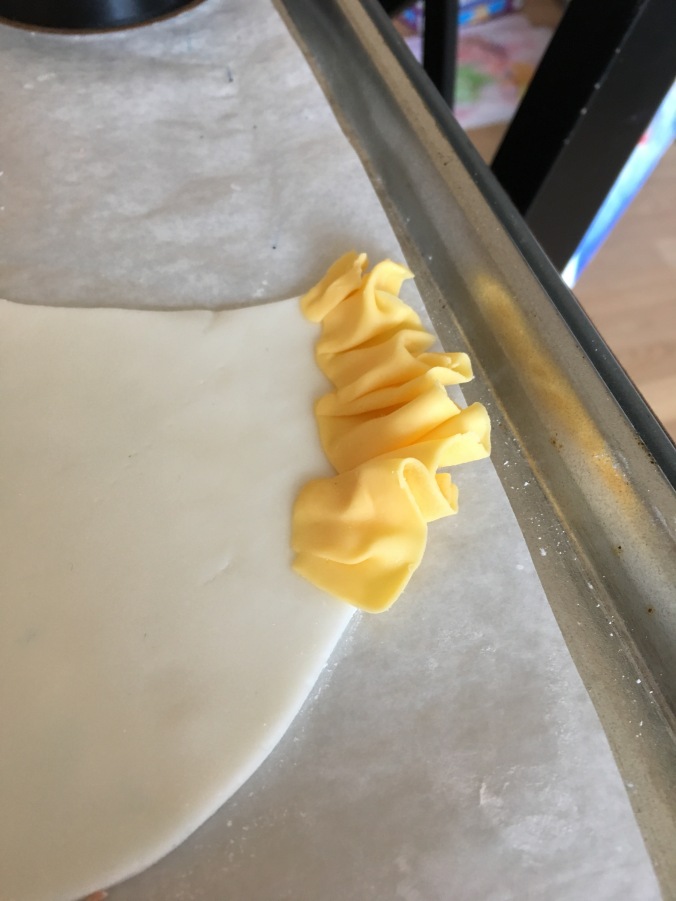 The finished ruffles, below. This did not take very long.

The next part, I knew, was going to be much easier. I rolled out my fondant, but thicker than last time, for the main part of her dress.  I would layer this over her underskirt. I noticed that there is one barely noticeable layer above the tulle, so I started with that. 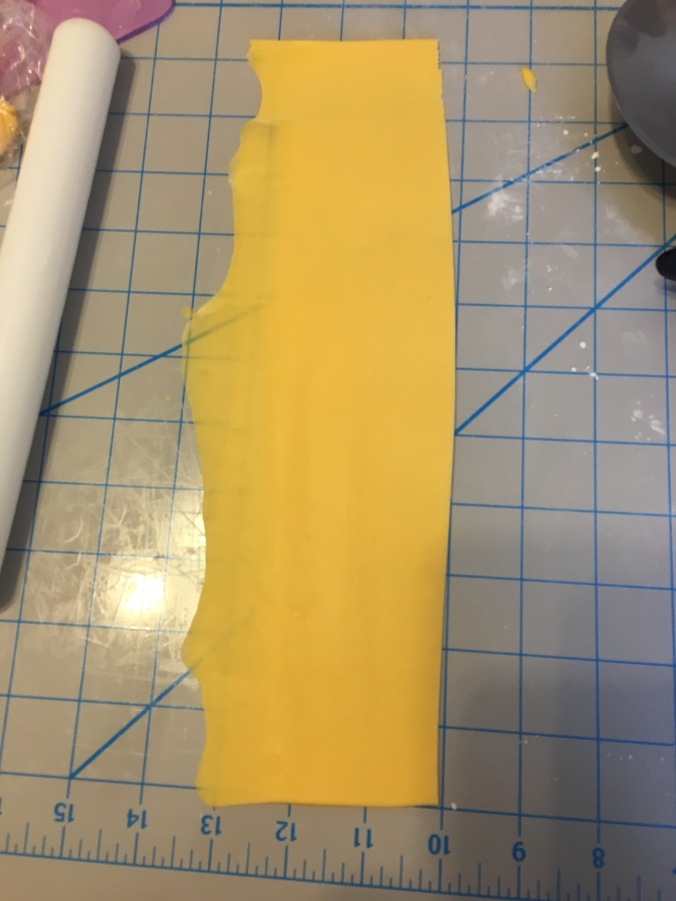 I added it to the figure, cut it down to size, and thinned it out at the top to avoid bulk. 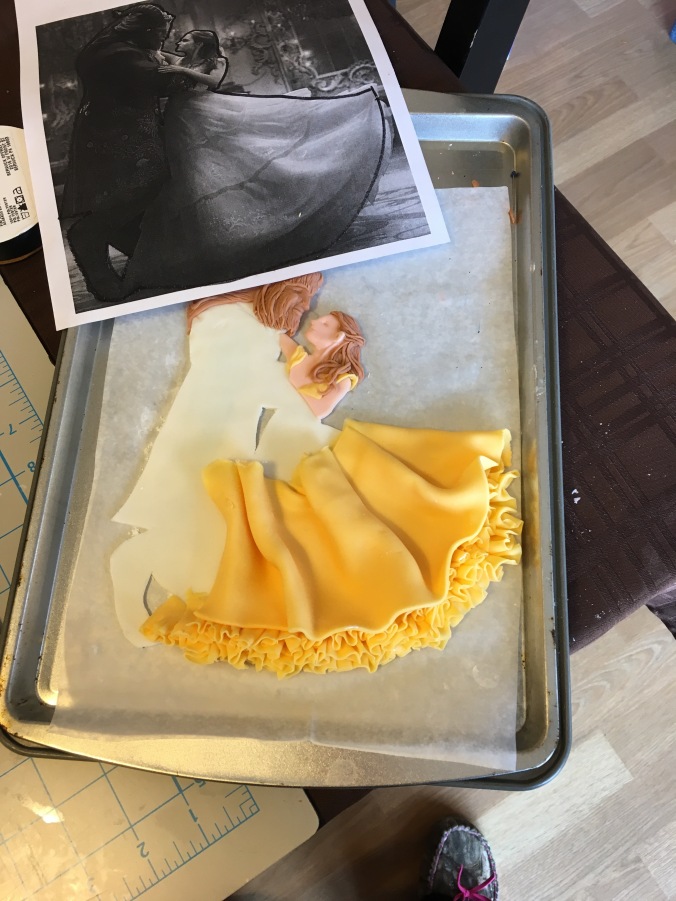 Using a pencil and looking at my reference material, I planned where I would place the rest of the layers. Then I simply added them from the bottom to the top. 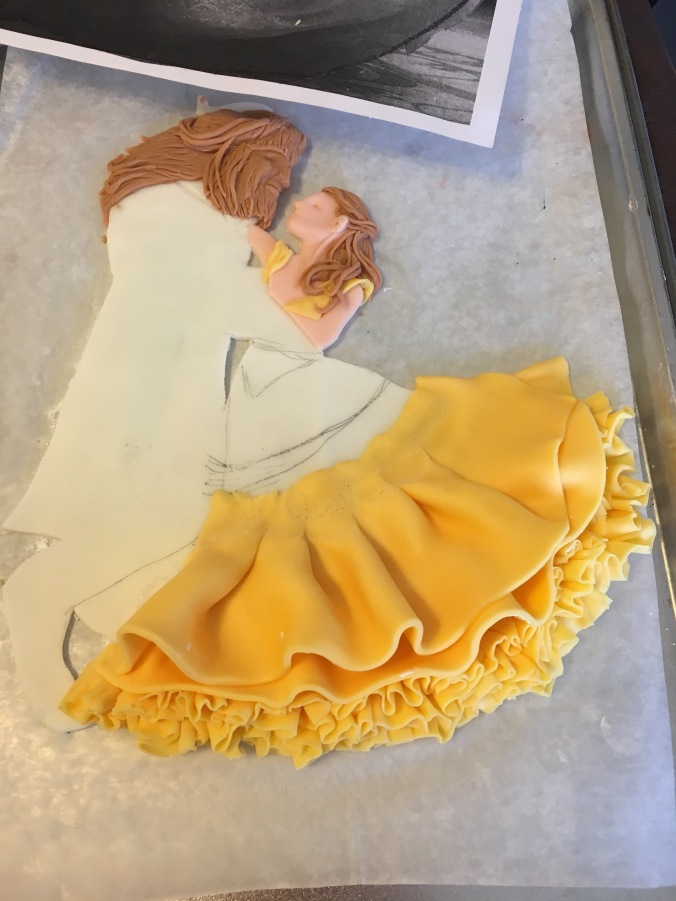 The top-most layer in her three-layer dress was the most-ruched. I made that a little thinner than the other layers to allow me to make all the pretty folds. I adjusted this layer and all the layers by hand to emulate the feeling of movement of the original photograph.

I took a break for a few days after this part was finished. The next part to complete was the Beast. The best place to start was his legs, so I could overlap his jacket over it. I made a layer of brown, and added a thicker layer in the middle to add depth. Then I made it look hairy with my veiner tool. I shaped small pieces of brown fondant and attached it to the bottom for his paws. Very small pieces of black fondant were used for his claws, which I shaped by hand. I used my viener tool to help me attach the claws so I wouldn’t smoosh them.

The next step was his jacket. I added some tiny white ruffles for his undershirt and sleeve. Only a simple, small amount of brown was needed for his hand. It can barely be seen.

Using small amounts of rolled blue fondant, I started to make the folds of his jacket at the shoulders and at the back where his buttons are. 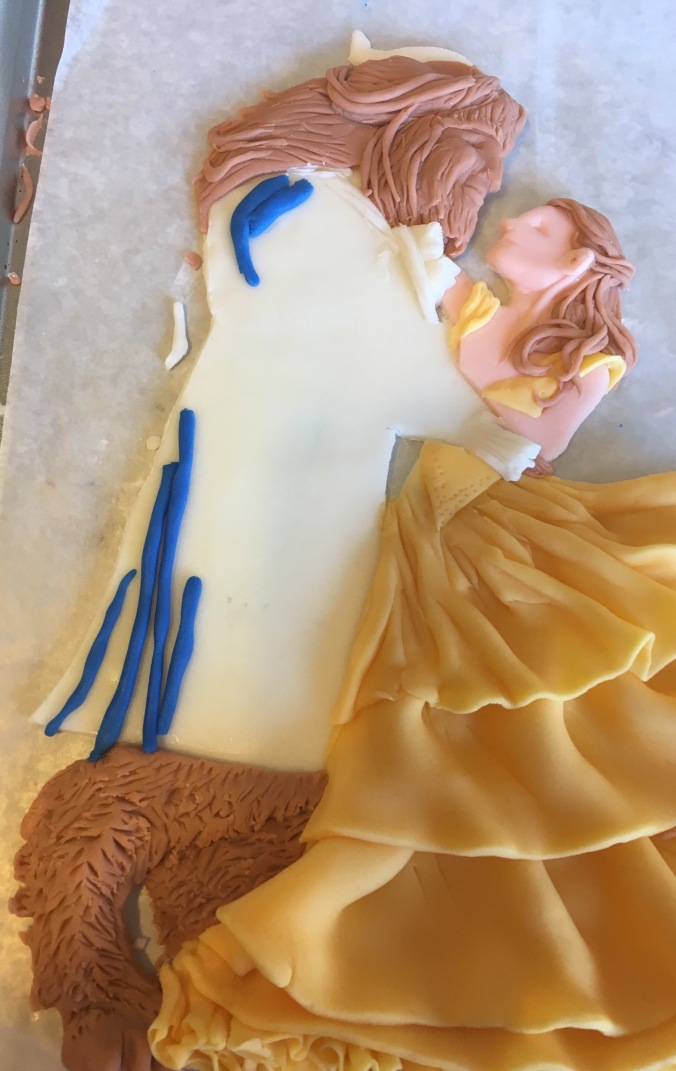 Then I cut his jacket using the same method I used before for the sillouette and gently added it on, cutting where it was too much. Then I added some fondant for his arm and made his sleeve over it. I used my ball tools and my viener tools to define the wrinkles even more.

I am going to take a very quick detour here …. I am very active on Instagram (@nicholescustomcakes) and posted a step-by-step photo. Somehow or another, it got featured! I went from barely any Followers to almost 800! And the post got 12,000 likes total! It was astounding! Usually  my posts only get about 20-40 likes.

Next, I added his horns with some dark brown fondant and used a flat-sided tool to add the texture. Then I used some small bits of white fondant to add his buttons and the piece in her hair. 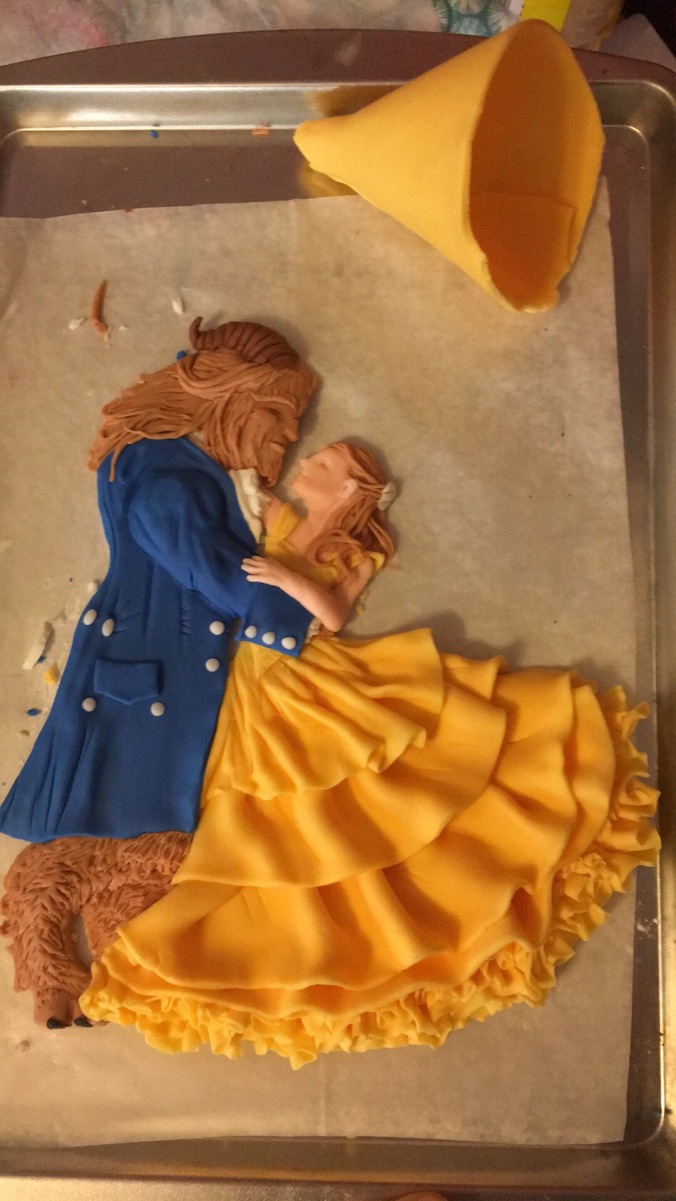 I bought a fresh, new small tipped paint brush at Michael’s Arts and Crafts to paint the remaining details. This part was very relaxing. I made edible paint by combining gold dust and a little vodka. I cleaned by brush often to avoid build up and to keep my lines clean. When the paint builds up on your brush, your strokes become much less defined.

First I painted the buttons and the hair piece, then cleaned up where I got paint on the jacket with a little water. Then I went back in to do the embroidery. My brush wasn’t quite as fine as I expected, so my strokes ended up being thicker than I wanted, but that’s okay.

The very last thing to do was to take a small, dry brush and to add a little shading on the jacket and their brown hair, as well as the horn. I decided not to shade the dress at all because it makes its own shadows. I added some blush to her cheek, but I cleaned it off because it was too much. All I did to take it off was wet a clean brush, wet her face, and pat it dry with a paper towel. You can’t always erase your mistakes with luster dusts, but since this area had no other painted details, I could. 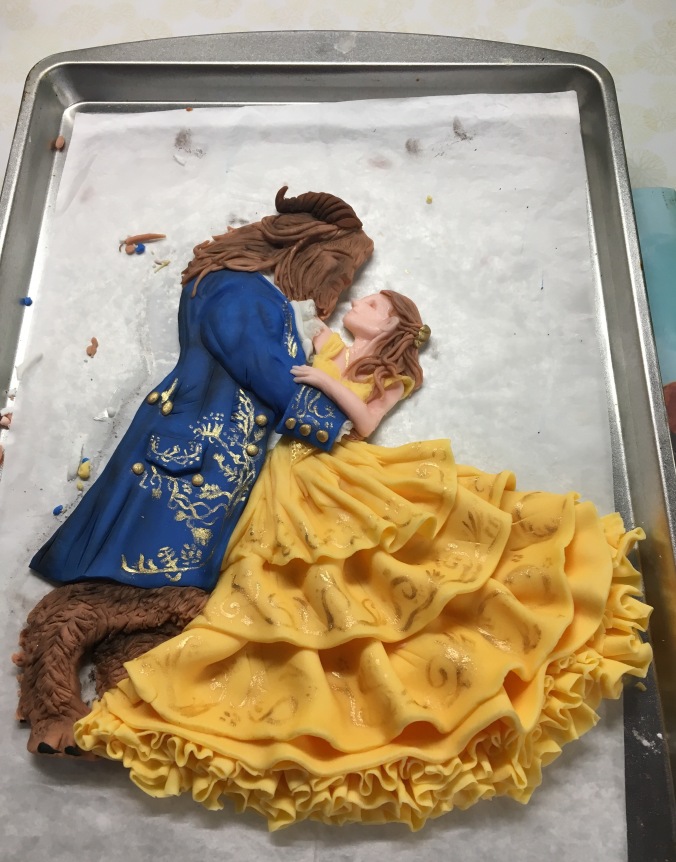 Next stop will be adding this to a cake!

Rules: Must be able to pick up on March 18 or 19, 2017 at 9-10 AM or in the afternoon in Quakertown, PA. You will receive one cake, no purchase necessary. Winner will be drawn randomly on Woobox.com. If the winner does not claim the cake, we will just have to eat it ourselves (darn!). All customers are eligible to win (both new and existing). This giveaway is NOT sponsored by the Walt Disney Company or Facebook.

Daniel M. was randomly selected and won this cake! Here are two pictures of the finished cake, which was chocolate chip pound cake with vanilla buttercream icing:

They loved the cake and gave me this wonderful feedback:

Everyone loved the beautiful cake! The cake was delicious! It tasted as good as it looked! Even better than the taste was the fact that the cake gave us a reason to get together with friends and family. Thank you again for the beautiful cake and the memories we made because of it.

Thanks for reading!
Nichole

4 thoughts on “Beauty and the Beast Cake Giveaway! ”