Time for a quick tutorial! But first, I want to say that I adapted this idea from the Starry Delights blog here: http://www.starrydelights.co.uk/index.php/football-shirt-cake/ .

My nephew, Nate, has turned 11! He’s my godson and we almost share a birthday — he’s on the 1st and I am on the 6th. I’ve been making cakes for him for a while now: 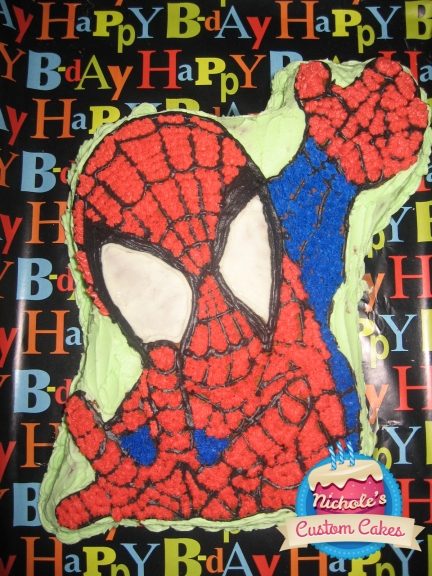 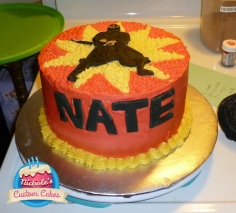 And I haven’t made him one in a few years. My very first one for him (above) was a Spiderman Wilton cake and I haven’t used the pan since then! It was simple, but I was really proud of it at the time. You can see he went through a ninja phase and also a Ben Ten phase. But what he really loves right now is football – as a fan and as a football player himself. Last year, his team even won the Championships!  Football is really big in his family and in his area, so it only made sense.

So I got the idea last year (or the year before, I think) of making him a jersey cake. My sister uploaded the photo below to Facebook and I was inspired. My skills have really progressed since the slightly embarrassing Lego cake above, so I really wanted to make him something cool.

I found the blog (see first paragraph, above) about how to make a realistic jersey and knew I had to make my own version for him as a surprise.

The first thing I had to do was print and scale down the Parkers logo, Under Armour logo and the Adidas logo. I wanted it to be a very close replica! I do all of this in a Word Doc. Old school, I know.

Then I cut it out and put it on my 1/4 sheet pan to make sure that it will all fit properly.

I hand-cut all my letters out of fondant. I actually had to make a new Adidas logo because I made it the wrong color, whoops. His birthday message was out of my favorite Tappit letter cutters. I really didn’t think the tiny Under Armour logo was possible, but it turned out pretty good (if you didn’t get too close!). 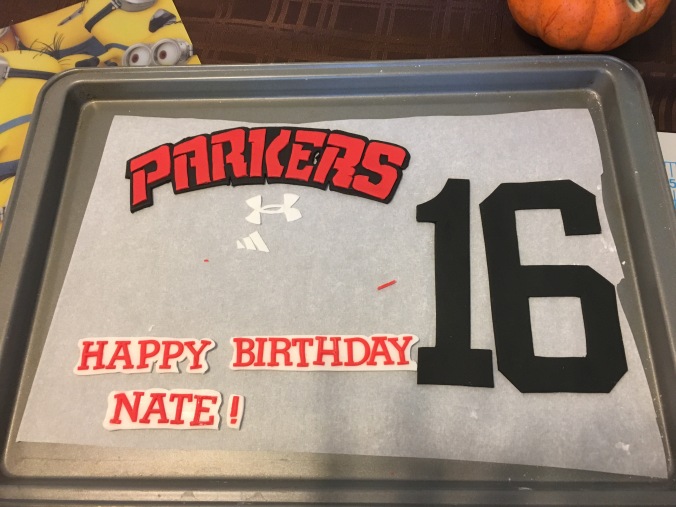 I knew that I didn’t want to cut away from the cake to make the arms, but wasn’t sure how to tackle that. But then I remembered that I had a spare 6″ cake in the freezer from another project. Really glad that I didn’t toss it! So what I did was I cut it in half, then adjusted it to look like football jersey sleeves by cutting up at an angle. 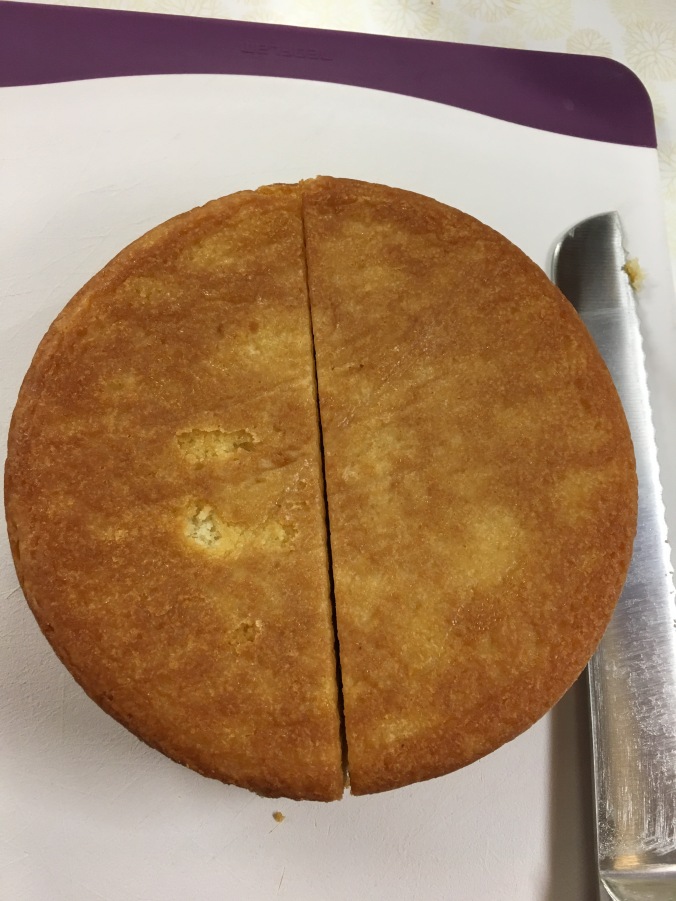 Then I put it onto the sides of my quarter sheet cake and adjusted accordingly to make sure it would fit on the board! I had to use a 13″ x 19″ board to accommodate the sleeves.

Nate chose a red velvet cake. I have tried other red velvet cake recipes before, but decided to try one that was specifically meant for a sheet pan. I found it on Pinterest, of course, from the Spice Southern Kitchen blog: http://spicysouthernkitchen.com/red-velvet-cake/

When it was time to decorate, the first thing I did was a good crumb coat in buttercream. I also used buttercream to attach the sleeves to the sheet cake. Then I let it rest to chill and set. 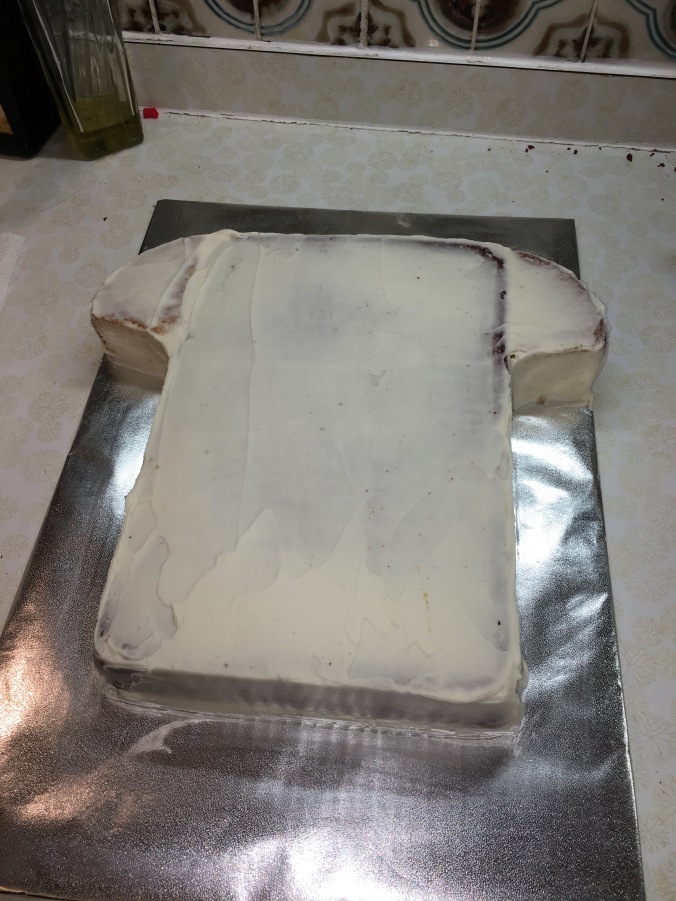 From there, I had to cover it in fondant. First thing I did was a light coating of vegetable shortening so that the fondant would stick to buttercream.

Using a toothpick, I drew where I wanted the undershirt to be. Then I traced over my markings on parchment paper (which is slightly see through), making sure I also marked off the width of the side of the cake. 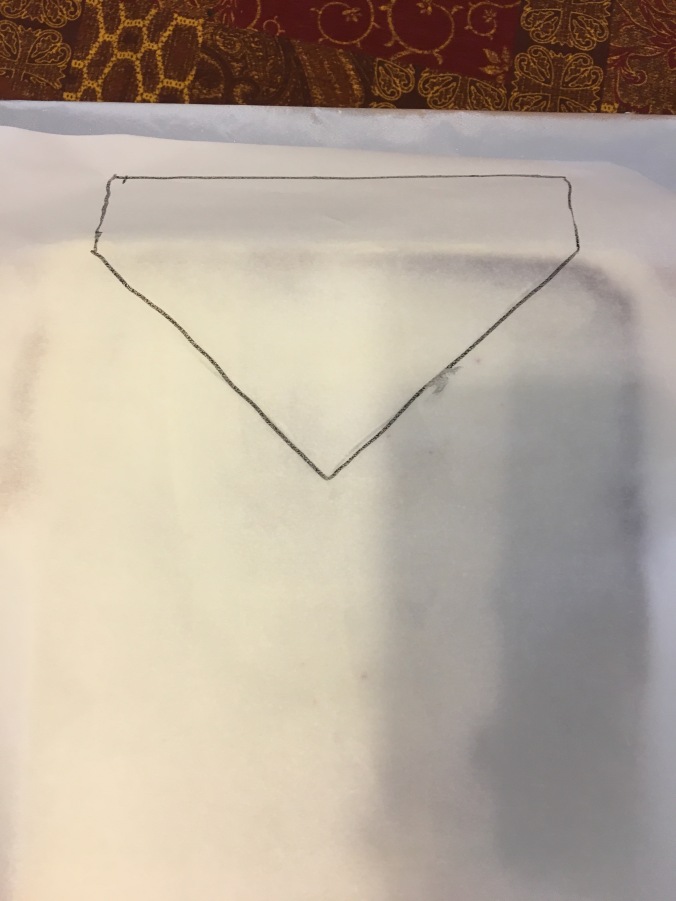 Then I laid my template on my black fondant and cut it out with a pizza cutter.

Then I placed it on my guidelines and trimmed it up. 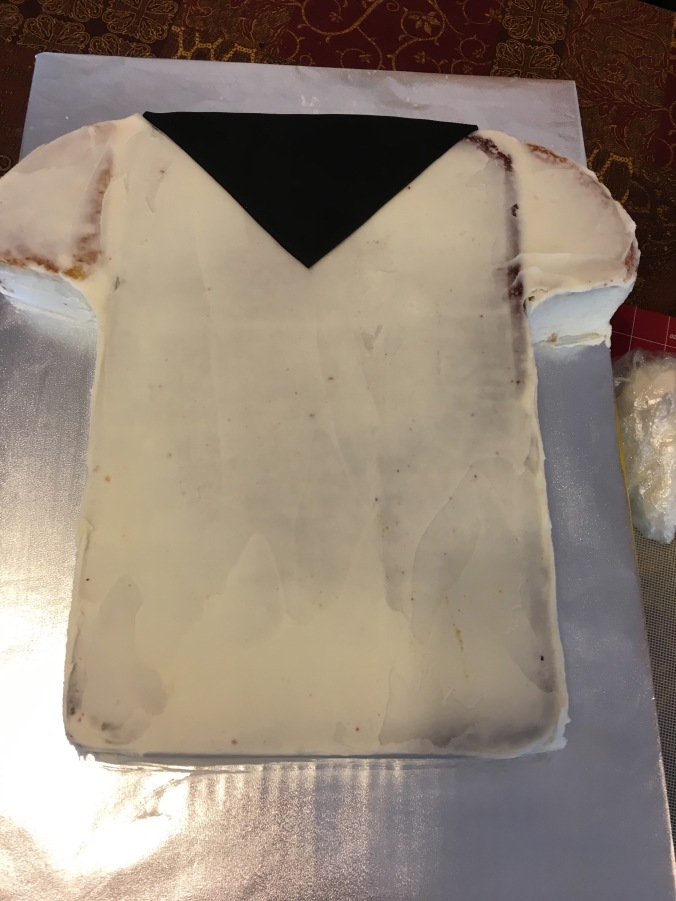 Next, since I wanted a realistic shirt, I rolled some fondant and tapered it at the top and applied it to my cake. This would be for wrinkles that naturally occur in fabric. 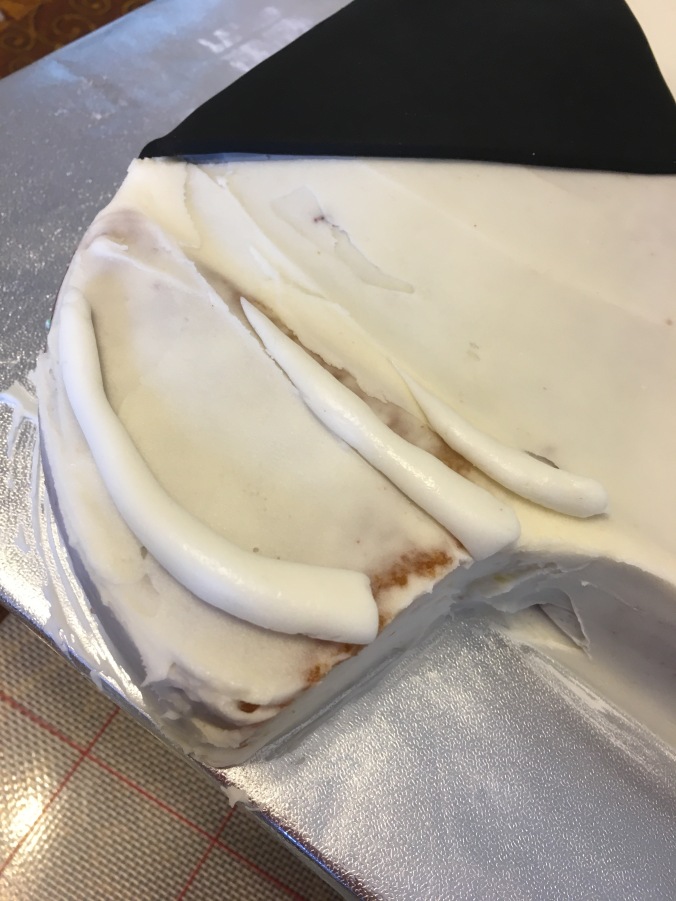 I make wrinkles where the arm meets the arm pit and long ones on the torso. 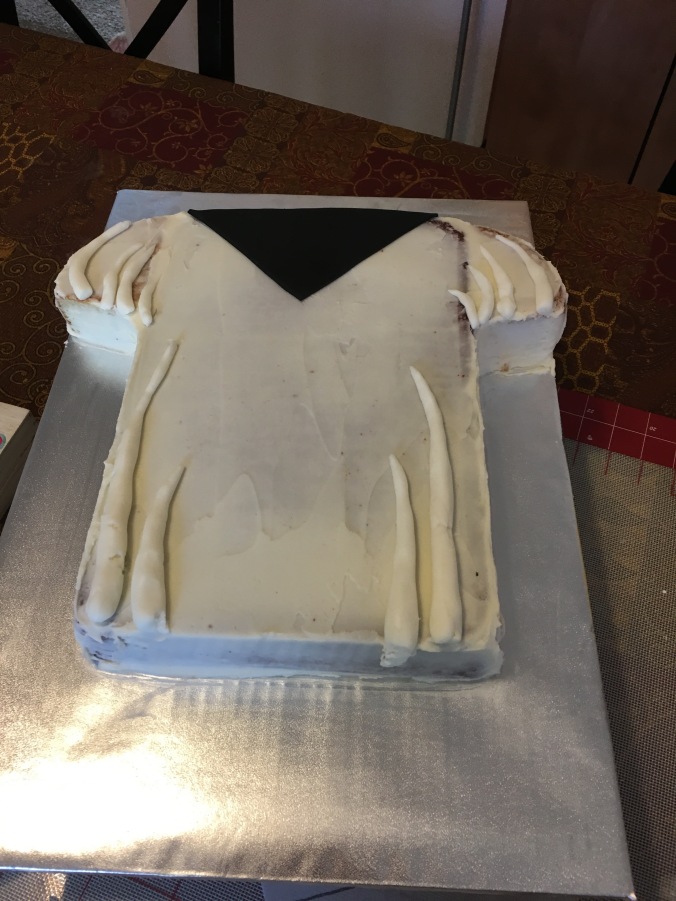 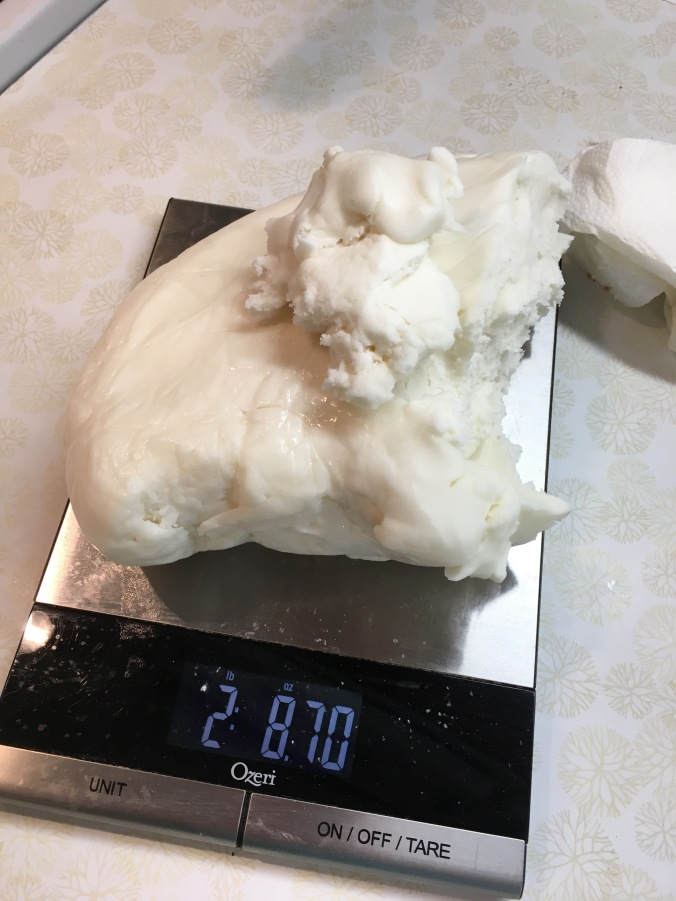 I rolled it out as evenly as I could. 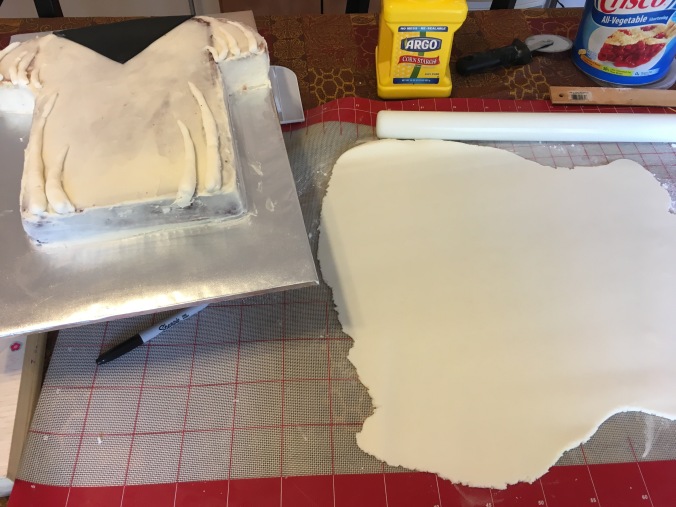 I folded the fondant over and placed it over half way. Then flipped the top onto the cake.

I marked where the black undershirt was hidden underneath and cut it out with my X-Acto knife. 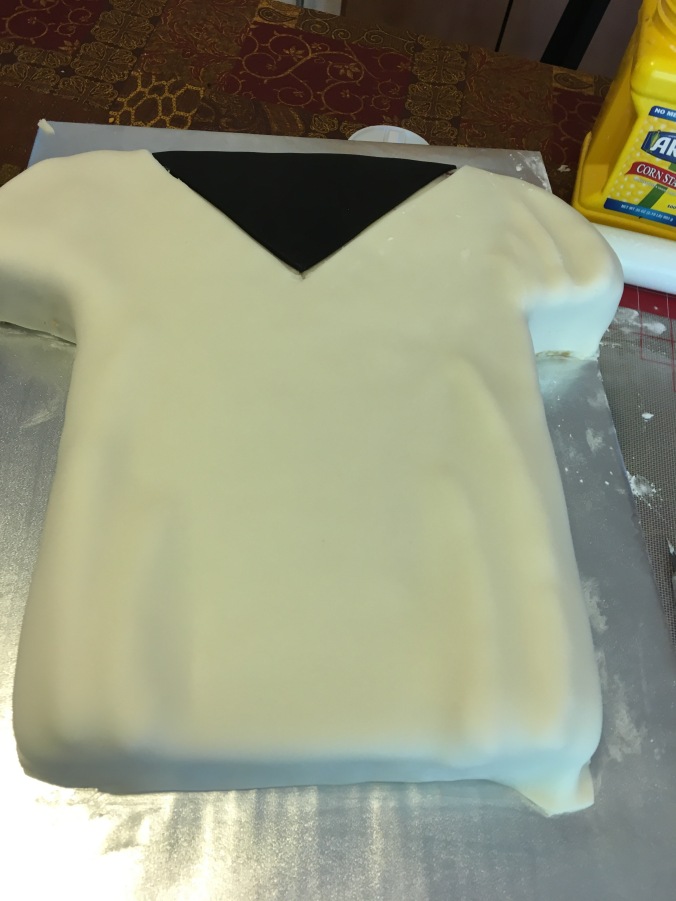 Then I wanted to add my collar. I used my ruler and my X-Acto board as a guide.

Then I placed on both sides and trimmed it down. I made sure to overlap with the black undershirt to make sure that it covered the gap. Don’t mind the Halloween candy in the backround …

Next, I cut some gray for the lines on the sleves, applied them, and trimmed them up. 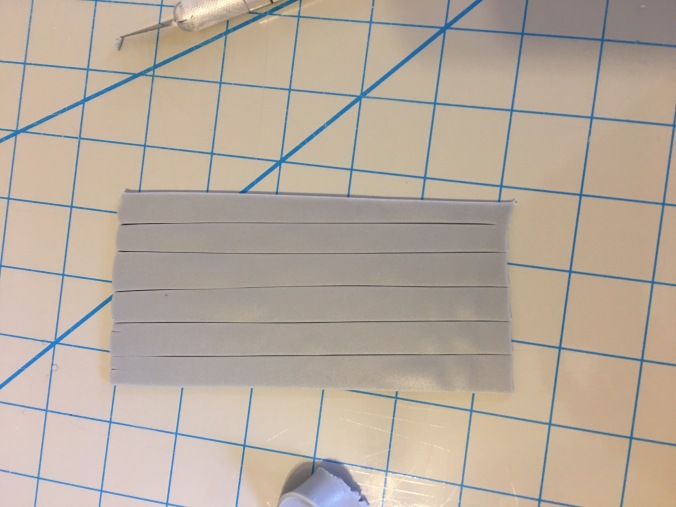 Next, I wanted to add some shading. I mixed white and black petal dust and got a large, dry Wilton paint brush and lightly added shadows.

I think this is what truly made everything POP and come together. I forgot to mention, I also added my logos and numbers after making the collar. All it needed was a light moistening with water. I used my veiner tool to add other details. I stuck on the birthday message by wetting it with some water and was done!

When the lighting was good, I took my “professional” picture. I sort of like the one above better, though!

Finally the night of his party came. Most of his friends were decked out in Under Armour and Parkers gear, so I was excited for them to see the cake. When we presented him with the cake, he was completely surprised! And all of his friends loved it, too. Here he is with his cake:

I hope that you enjoyed this blog post. If you have any questions about anything I may have missed or left out, just give me a shout here, on Facebook, etc.